Pitch is a feminist-minded mainstream show about the slow, meandering game of baseball. There’s a great deal riding on it, and a great deal working against it. 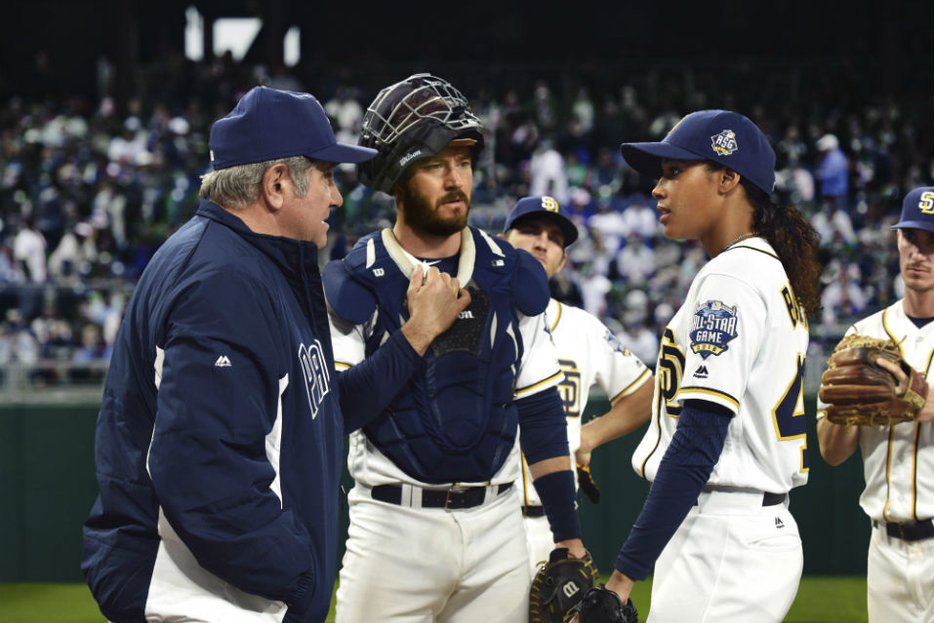 In 2014, Mo’ne Davis became the first girl to earn a win and pitch a shutout in Little League World Series history. In 2015, French U-18 junior national team shortstop Melissa Mayeux became the first known female baseball player to be added to Major League Baseball’s international registration list, making her eligible to sign with a major league team. More recently, we’ve seen professional baseball’s first all-female battery, a combo that debuted this July with the independent league Sonoma Stompers. (The team, which has made a deliberate project of including women on their roster thanks to the investment of director Francis Ford Coppola, just won its first league title.) For those who have been rooting for women’s inclusion in baseball at its highest level, the idea of a weekly, dramatized version of that dream is certainly an attractive prospect.

San Diego Padres pitcher Ginny Baker (played by Hamilton, Ontario–born Kylie Bunbury) has just been called up from the minors, and is about to make her debut at Petco Park to a boisterous sell-out crowd of 43,000. She’s the first woman to compete in any of the four major North American professional sports leagues, a player who has slogged it out in the Padres system for five years before getting her groundbreaking start on the mound. She wakes up on game day to a hotel room full of congratulatory flowers and fruit baskets, and a card from Hillary Clinton. “I’m a little partial to someone trying to be the first woman to do something,” reads the signed note from the presidential candidate.

Ginny’s determined morning walk from her hotel room to the limo, and from the limo to the clubhouse, is fraught with further anticipation. The television in the elevator features a sports reporter suggesting she may be less Jackie Robinson-esque legend and more flash-in-the-pan. Enthusiastic fans beg for her autograph. An adorable little girl holds up a sign that reads, “I’m next.” (Admittedly, that was the point where I got choked up.) In a mere four minutes of well-crafted television, it’s clear that a lot is riding on this woman, just like there is a lot is riding on this show.

Back in May, when Fox announced that its fall lineup would include a fictional drama about the first female ballplayer in Major League Baseball, the reaction was a mix of joyous fervor and predictable sports-related sexism. A good swath of baseball fans were ecstatic they’d finally be getting their own Friday Night Lights, long confused as to why the small screen hadn’t seized on the dramatic romanticism they saw every time they went to the ballpark. Female fans in particular were buoyed by the show’s innovative and timely subject matter, seeing Pitch as a chance to open up a conversation about sports culture representation as it exists not only on the field, but off of it as well.

Then, of course, came the typical poisonous chorus of sexism. Standard online trolls questioned the believability of the premise, likened the concept to fantasy or science fiction, and swore they’d never tune in. Predictably, that toxic digital soup rejected the very concept of a female pitcher outright, and was not afraid to be blisteringly cruel about it. These were the same folks always eager to declare every aspect of baseball a man’s domain, from media mastheads, television news desks and event panels to front offices, umpire crews and announcers’ booths. That group was more than happy to write Pitch off before the trailer was even released to the public.

As a result of all this buzz, both good and bad, Pitch has—perhaps unfairly—a great deal riding on it, and a great deal working against it. Before the first episode even aired, the character of Ginny Baker became a stand-in for anyone, fan or professional, who has felt excluded from male-dominated realms. Women, tired of being under or misrepresented in primarily male-driven sports media and culture, were anxious that maybe Ginny be nothing more than a poorly formed female stereotype, vapid and emotional, or apt to find romance with a male teammate. Worse, if the show wasn’t any good, it had the potential to fuel the already raging fire of derision, and discourage future support for female driven dramas, especially those with sports-related subject matter.

If the pilot is any indicator of what’s to come, it’s only the sexist status quo that need be worried.

Pitch has attempted the near impossible task of making a feminist-minded mainstream show about the slow, meandering game of baseball, and so far they’ve managed to pull it off. This is in part because they’ve taken the notion of authenticity seriously, shooting at MLB locations and using MLB equipment, staffing themselves with knowledgeable MLB consultants, and even recruiting numerous sports personalities to play themselves. (The first episode comically features a cynical report on Ginny’s pitching from real-life Fox reporter and MLB Network Insider Ken Rosenthal, and a blistering takedown of Ginny’s detractors from Garbage Time’s Katie Nolan.) The baseball scenes themselves are certainly emotionally manipulative and nothing short of mesmerizing—no small feat when working with actors instead of athletes, and when depicting what is often accused of being a low-action, boring game.

But most of the credit for how compelling Pitch is goes to the performance of twenty-seven-year-old relative newcomer Bunbury, who plays Ginny with the nuance necessary to make the showaddictively appealing under such intense scrutiny. Her character is navigating a world that either doesn’t want her, or sees her merely as a profitable, gimmicky commodity, and that weight is subtly communicated through every scene. Somehow Ginny is rendered as both heroic and vulnerable, happy to fiercely stand up to detractors, while still revealing her natural frustration and self-doubt.

They’ve been careful not to allow the feminist undertones of the project to devolve into the offensive “pink it and shrink it!” merchandizing and “Girls Night Out” and “Baseball 101 for Women” events MLB is currently criticized for.

In a lot of ways Pitch will be familiar—even formulaic—to baseball fans and television junkies alike. It is, at its core, a pretty typical underdog story peppered with the usual baseball suspects, and takes full advantage of the classic swelling music moments sports drama is known for. At its centre is the defiant, hardworking, overlooked athlete who triumphs over widespread disbelief. Her father, who looks like he will loom large throughout the series, is obsessive, overbearing and abusive, seemingly more intent on “raising a ballplayer” than being a good dad. Then there’s Ginny’s pain in the ass (and ass-slapping) egotistical star teammate (Saved By The Bell’s Mark-Paul Gosselaar) who initially dishes out a hard time, but later warms up to the rookie he’s catching for. Baseball fans will also recognize the curmudgeon of a manager who, despite his hard façade, really cares, the out-of-touch owner who talks private jets and million-dollar price tags, and the slick, pretty GM who is always charming, flirting, and schmoozing. Even Ginny’s personal manager, played flawlessly by Heroes’ Ali Larter, is the ball-busting, pencil-skirted bitch-type that screens big and small love to serve up time and time again.

What’s fascinating is that even with all these well-worn pop culture signposts and easy sports stereotypes, and some clumsy baseball exposition thrown in along the way, Pitch still manages, as promised, to be revolutionary. (Besides, that roster of professional baseball caricatures is actually tons of escapist fun for beleaguered fans beat down by real-life pennant races.) Pitch has a genius strategy for broad success: dress groundbreaking subject matter in an easy to swallow, glossy weekly format that your average Thursday night viewer can get behind. You’d probably have to be a legitimate monster not to be rooting for Ginny to succeed, and for this show not to succeed.

If the Ginny Baker #43 bobble-head that arrived on my doorstep is any indication, the marketing team behind this show knows exactly how important it is. They’ve organized various screenings at ballparks across the US, and have been careful not to allow the feminist undertones of the project to devolve into the offensive “pink it and shrink it!” merchandizing and “Girls Night Out” and “Baseball 101 for Women” events MLB is currently criticized for. On September 4, the LA Dodgers hosted a “Take your Daughter to a Game Day” in partnership with Pitch, a family-friendly (and apparently gender signifier-free) event where kids got a personalized trading card and an opportunity to watch the premiere in advance of its airdate. Further, Fox offered up a video where children were interviewed about the idea of the first female MLB player, underscoring not only how sexism is ingrained from a young age, but also how inspiring the show’s concept is for girls and boys alike.

Last week, when a New York Times tweet asked, “How will Pitch cater to the hard-core baseball fan expecting authenticity while still appealing to women?” the immediate online reaction revealed the very foolishness of the question. According to a 2014 Nielsen study, women make up thirty-five percent of sports fandom across professional sports leagues, and yet, as indicated by mainstream questions like this, they’re still at best considered a fringe category, and at worst totally disregarded. These women took their disdain to social media in droves, creating a #thisiswhatabaseballfanlookslike hashtag, and posting pictures of themselves and their daughters at the ballpark. The impromptu action became a kind of accidental grassroots marketing campaign for Pitch and evidence of the show’s cultural importance, proving the hunger for a product that speaks to the exclusion women face at every turn.

Representation matters in both truth and fiction, and sadly it’s sometimes the fiction that has to come first. The fact that the story of Ginny Baker is being broadcast into North American homes every Thursday night means a great deal to a lot of people—athletes and otherwise—who have long been battling to find a place in the exclusionary world of professional sports. The people behind Pitch clearly know all this, and are taking the pressure seriously—both in the quality of the show, and the culture they’re building around it. If the story of Ginny Baker can find excitement and success in the face of so much casual derision, it’s certainly a starting point, and one that I’m happy to cheer for from the stands. 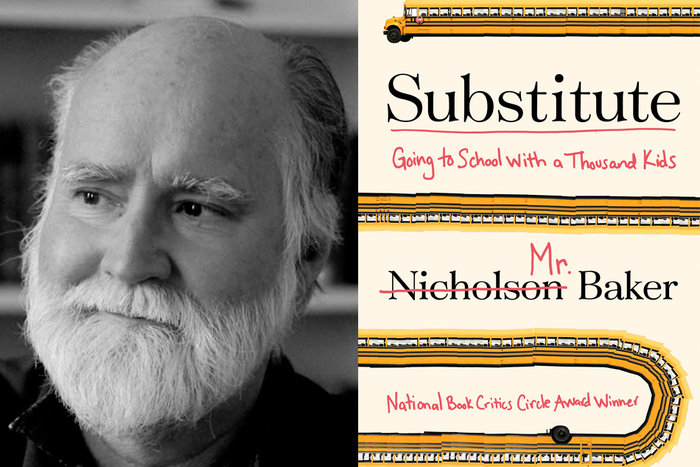 Interview
‘There Has To Be Less School’: An Interview with Nicholson Baker
Talking with the author of Substitute about an educational system at odds with learning, seduced by technology, and… 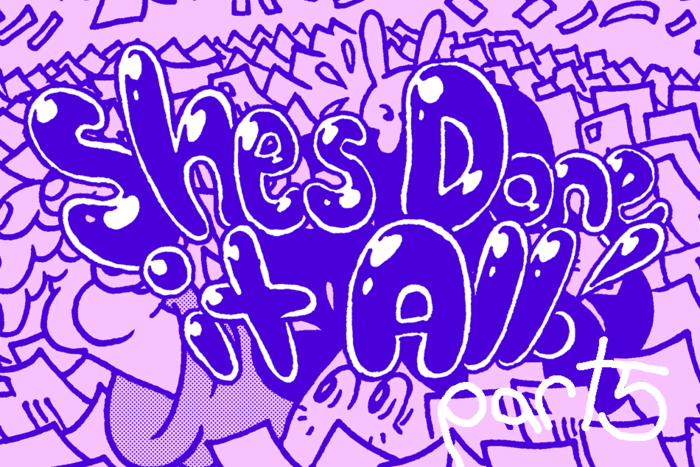