My ‘Just In Case’ Inheritance

When I learned that the jewelry my family had given me over the years was a morbid kind of safety net, I came to dread my future every time I put on a piece of gold.

Nadya Agrawal is a New York-based writer focusing on global news and culture. She edits... 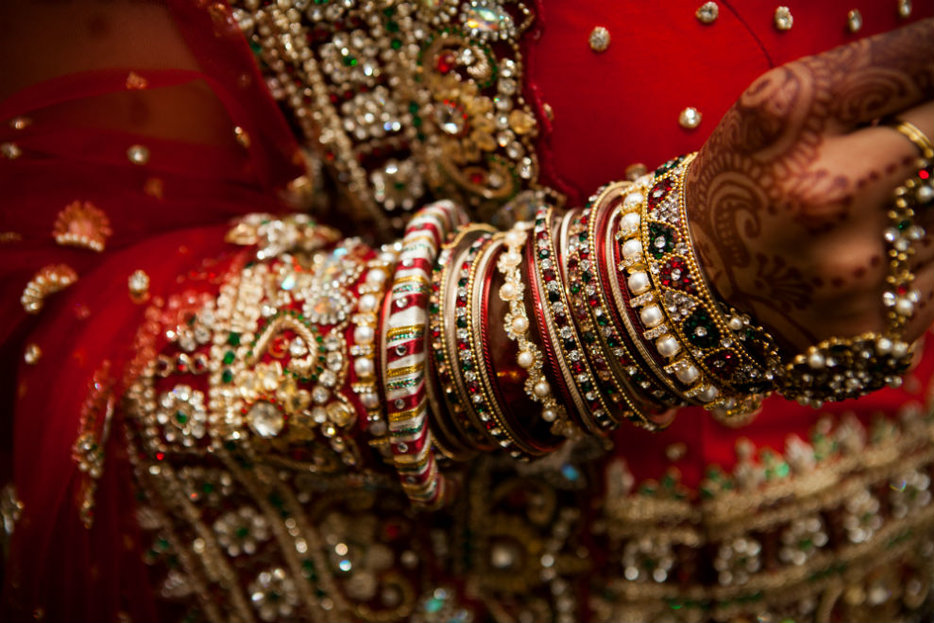 India is the largest consumer of gold in the world. It works as the counterweight against the constant rise and fall of the rupee. Gold is a major cultural and social cornerstone: We wear gold to weddings and poojas, we give gold as gifts for newborn babies and newlyweds. When Indian businessman Datta Phuge wanted to show off his wealth he did it by ordering a custom gold shirt, worth 12.7 million rupees, or $240,000. It held 7.3 pounds of 22 karat gold and contained 14,000 faceted pieces. Three years after he made headlines for his shirt, he was beaten to death by 12 men over a money dispute. If the country’s love of gold is on one side and its poverty is on the other, violence is the cruel spectre flipping the coin.

Gold is my family’s favorite gift to give. When my mom was pregnant with me, aunts and grandmothers would send her gold coins via friends visiting America. Every year on my birthday, I’d receive a custom charm or heirloom bangle. All gold. It didn’t take long to amass a small treasure trove. Tiny gold statuettes of deities strung along delicate chains, a series of pendants twisted into the shape of an om. Gold earring studs with diamonds I’d never be old enough to wear. Rings wrought for baby fingers.

In the decade between the ages of 4 and 14, the last thing a girl wants is solid gold jewelry from the Motherland. Little girls want the new mermaid Barbie doll whose hair changes color in water, or they want that Harry Potter book the library never has, or they want pink plastic jewelry that goes with everything. They don’t want a pair of gold dolphin-shaped earrings which will be whisked out of their hands and put “in a safe place” as soon as Kavita Massi is done waiting for a reaction.

This jewelry was always out of bounds—I only ever saw it when someone was getting married. These pieces felt more like a gift for my mom than me. Sometimes she even wore the earrings to parties, fuelling my conspiracy theories that this was all a racket for the older women in my family. I had to wait till I had all the spitting venom of a teenager before I asked her when I’d get to keep the jewelry myself, and why everyone insisted on giving me heavy gold pieces that were at least 30 years out of fashion.

“It’s for your dowry,” she said, with all the succinctness of a woman practiced in dealing with teenagers.

In 1961, India passed the Dowry Prohibition Act. It made demanding or giving a gift “as a consideration for the marriage” illegal. You couldn’t buy or sell women, the government decided. But whatever they said on high, what happened in the village between families could never be so easily codified—you cannot simply say “no more” to tradition.

While women are handed over along with new TVs, gold watches, and cash, they also continue to die in the mad rush for dowry payouts. The Indian National Crime Records Bureau determined a woman was killed every hour in 2012 because of dowries. These “dowry deaths,” as the media called them, happen when the groom shakes the bride’s family down for more money. Or, grooms simply kill off their brides to marry again and receive a new dowry.

At 13, I knew dowries were illegal and dangerous. In my pre-teen mind they were synonymous with death. They were the epitome of sexist injustice. So when my mother mentioned my dowry, a chill snaked down my back and made my hair stand on end. I was raised thoroughly American, I was not a statistic from the Subcontinent.

“What do you mean dowry, mom?” I repeated, because she had gotten distracted chopping vegetables for dinner.

“I mean, your Nani and Dadi are giving you jewelry to keep in your dowry,” she said, referring to my maternal and paternal grandmothers. “When you get married, you’ll take it all with you to your new house. This way, the jewelry remains yours. And,” she said, sliding a cutting board full of carrots into the frying pan, “if something bad happens, you can sell the jewelry to take care of yourself.”

My dad’s dad, my grandfather, brought his young family to America after receiving a placement at Texas A&M University. He and his skills were being imported from India to work in the growing fuel industry. It was the early 1970s, Asian immigrants were being given permission, for the first time in decades, to make a home in America. Everything was about to fall into place.

Only it didn’t. Instead of living in the lap of promised luxury, my dad and his siblings grew up in Houston’s working class neighbourhoods. They knew few Indians besides themselves, so they acclimated and assimilated to those that assimilated before them.

By the time my parents were married and I was born in the early 1990s, my dad’s family had reached a sort of equilibrium—they operated a video rental store that brought in some money. My grandmother probably spent the most time out of all of them in that store, talking to customers and stocking shelves. It was there that she saw her first nameplate necklace on a Mexican woman who had walked into the shop. Her gold pendant, with its dainty heart and etched face, seemed so delicate and charming to my grandmother. So she got one made at the local Indian jewelry store with my name. It was one of the first pieces added to my dowry.

I asked my grandmother why she gave gold so freely to her granddaughters, even when she didn’t have much money herself. “It’s for security,” she said. “It’s just what Indian people do.” I pressed her. Did she grow up hearing horror stories about women ending up in bad marriages and needing this sort of security? No, she replied, but this is just in case.

I was raised with a fear of men, strange and familiar. “Never be alone with a man,” my mother had been telling me since I was small, “unless I tell you it’s okay.” Stranger danger was always a concern for my young parents, who were still going to school when I was born and had to work all day when I was an infant. We would practice how to avoid being pulled into cars and the right questions to ask men who said things like “I lost my puppy, can you help me find him?” or “I’m a friend of your parents, they sent me to pick you up from school.” Law & Order: SVU was often playing in the background in the evenings, and my parents would use its storylines to ask me and my brother questions about dangerous encounters we might have had. At a certain point, talking about abuse like this stops becoming an issue of “if” and becomes a “when.”

When I learned that all the gifts I’d been given over the years had a morbid intention, it felt more than ever that it was only a matter of time before I’d be harmed or worse by a man. In this case he’d be my husband, not a stranger. Confronting the fact that my family was preparing me for the worst meant thinking about this very possible, very real future every time I put on a piece of gold. I’d be getting dressed for my favorite cousin’s wedding and thinking about how my own might be the worst mistake of my life.

The culture of women in my community is double-edged: there is a lot of talking behind hands, pursing of lips, public shaming for unmarried or never-pregnant members, but there are also unspoken laws of protection.

We don’t always call feminism by its name, but it’s still there on the outer edges of what’s expected of us. Sometimes feminism feels completely absent from a situation, as if we all forget that we too are women when we demand tea be served and good appearances be maintained. But we still err towards protecting each other.

As the Pakistani-British feminist thinker Sara Ahmed writes in her essay “Feminist Aunties,” feminism is not an inherently Western concept. “It might be assumed that feminism travels from the West to East. It might be assumed that feminism is what the West gives to the East. That assumption is a travelling assumption, one that tells a feminist story in a certain way, a story that is much repeated; a history of how feminism acquired utility as an imperial gift,” she says. She talks about how her aunt Gulzar lived and taught feminism within the confines of Pakistani culture. Even when marriage was the norm, Gulzar side-stepped the expectation. She spoke confidently when she wasn’t expected to. And she owned herself. It was Gulzar’s inexplicit feminism that was handed down to Ahmed. Feminism didn’t come in a textbook.

For my grandmothers, giving me gold as an investment in my future safety was their feminism. This is how they maintained a matriarchy in a strongly patriarchal world.

My grandmother on my dad’s side didn’t have a dowry. Her father and his friend, my grandfather’s father, set up the match and got them married in the space of a few months. My dad calls it a “one rupee wedding,” meaning everyone was broke and it was done quickly and cheaply. When she gives me gifts, like the shell she brought back from Aruba or the table runner from Hyderabad, I think about how my dad and his siblings were on welfare during their early years in this country. She went from having nothing to making sure I had something, if I needed it.

I have a dowry and a small fortune of personal wealth because women before me didn’t. My teenage rage over having a dowry has settled into a sort of ambivalent quiet. Most of the pieces live with my mom in a series of scattered safety deposit boxes, but there are two that I do keep with me. A pair of gold hoops—baliyon—that my mother bought me, and that gold nameplate from my grandmother. Putting on my baliyon and nameplate are consistent acts of validation. They pull together a lineage of women who are scattered across the world by preference and politics. They remind me that strength is imbued in everything.

I hope there never comes a day when I’ll need to dip into my gold savings, but I can’t deny that it’s comforting to know that it’s there, just in case.

Nadya Agrawal is a New York-based writer focusing on global news and culture. She edits the South Asian-centered art and opinion magazine Kajal. 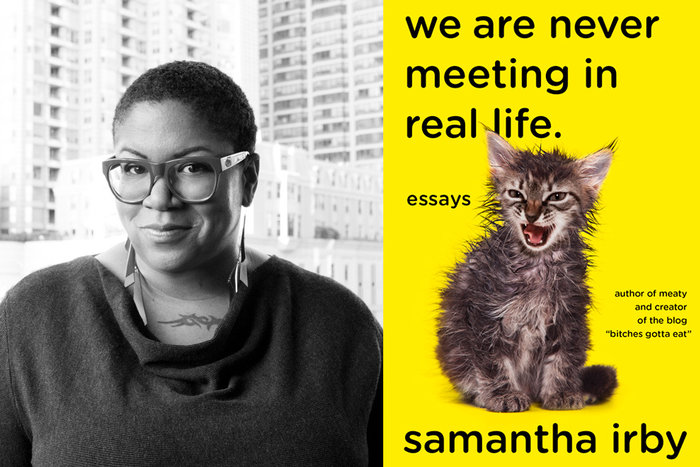 Interview
‘Here Lies a Bitch Who Loved Convenience’: An Interview with Samantha Irby
The author of We Are Never Meeting in Real Life on being a New York Times Best Seller, ordering off the dollar menu,… 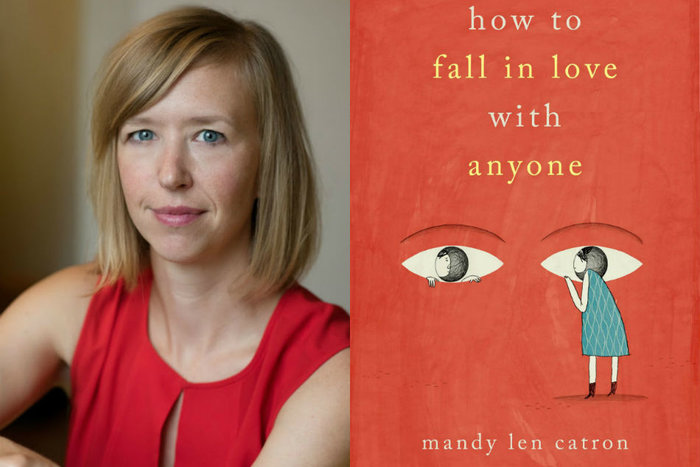 Interview
‘Heartbreak is Pedestrian, Even Though It Feels Profound’: An Interview with Mandy Len Catron
The author of How to Fall in Love with Anyone on Master of None, the need for more diverse love stories and being…