The Keeper of the Bees

I followed a desire to witness, but not control, the inner workings of living things. 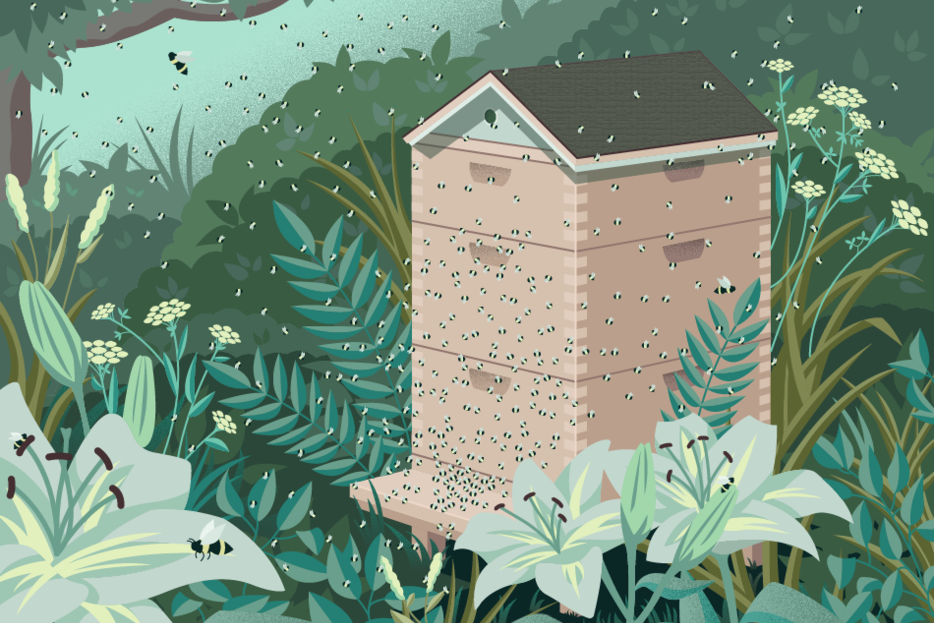 I’ve been obsessed with animals since childhood. Though I grew up in a rural-ish area and was a bona fide horse girl, it wasn’t enough. I tormented my parents by keeping outside fauna in my room for companionable observation. A common housefly? My friendly pet. A caterpillar? Temporary roommate. I kept it in a jar and provided milkweed until it formed into a chrysalis and later a monarch butterfly, at which point it was released into the backyard to expend its little life. During a farm visit, I was gifted a fertilized chicken egg which I then kept inside a mitten and warmed under a desk lamp until my father turned the light off, probably due to mounting hydro costs. A chick was on its way, the weight of the egg a telltale sign. One more pet opportunity lost. Though to be fair, I doubt I had much of a plan beyond the egg hatching. The thing is, these creatures would’ve gone through natural, preprogrammed, yet seemingly impossible processes with or without my interference.

I recall aptitude test results as I wrapped up secondary school that put me in the ninety-ninth percentile for a future in both the arts and agriculture. I chose books, but a deep curiosity about that other path remained.

Last year, after a few seasons of reading about homesteads and honeybees, I signed up for the Beekeeping 101 course at the University of Guelph, which has become so popular that people set alarms and join waitlists to vie for a space in two spring sessions. It taught components of biology, apiculture, and hands-on skills. The curriculum was geared toward hobbyists. The stress of farming for income did not factor in. Our instructor, a beekeeper with some thirty years’ experience, told the class that if we wish to keep bees in order to “save the bees,” not to bother. However, if we want to keep bees because we’re interested and wish to learn about and care for them, great. A line was drawn between the endeavours of animal husbandry and conservation.

Honeybees are not native to North America, but were imported by European settlers in the seventeenth century. The most popular breeds for honey production are Italian (the archetype honeybee: yellow and black) and Carniolan (a hardier, Eastern European honeybee). Where I’m writing this, in Canada, any wild honeybees are feral descendants of those that have escaped from domesticated hives. Wild, native bee species that do not produce honey are less recognizable but vital pollinators. Emerald-green sweat bees (often mistaken for flies), carpenter and leaf cutter bees, and bumblebees get overlooked. By keeping a honeybee hive, I learned, backyard beekeepers are not necessarily contributing to the strength of local bee populations, but potentially creating more competition for wild pollinators where sources are scarce.

It is honeybees rather than native bees that have become symbols of conservation. Perhaps because they’re undeniably fascinating, the intricate combs and social structure, the miraculous honey. Perhaps because we’re terrified: there is no single accepted cause for colony collapse disorder, and we’re agriculturally dependent on honeybees for current farming practices. Bees, trucked across the continent to pollinate monocrops, like almonds in California or blueberries in Atlantic Canada, face unfamiliar environmental conditions, travel stress, and a lack of variety in their food sources which wreaks havoc on their digestive and immune systems. As a University of Guelph honeybee biologist explained by comparison, it might be like eating only applesauce for your entire life. Will you live? Yes, but you will not thrive.

In the university bee yard, the honeybees seemed unperturbed as students fumbled through implementing our lessons with hive inspections (this is the term that’s used: inspection). Intentional movement and smoke work best. Bees probably don’t “smell fear,” which relieved the anxious in the group, but they do take aim at dark, shiny things, like sunglasses. No posturing while beekeeping.

After taking the course, and reading all the materials I could access, I volunteered to help load spring nucs at a beekeeping supply store. A nuc, or nucleus colony, is a small colony of a few thousand bees and a queen. Around two-hundred nucs came to the shop on pallets, in ventilated cardboard boxes. The storage area hummed and grew humid with their unique, warm, waxy scent. Because the boxes weren’t sealed tightly, thousands of bees began to escape inside the warehouse, barreling toward the light of the loading dock. Beekeepers arrived to pick up their orders, unphased by the swarms. One farmer teased me for wearing a hat and veil as I Tetris’d twenty-five nucs into his Toyota Yaris and bees pinged against the windows inside. When I asked if he’d be alright on an hourlong drive, he responded: What are they gonna do, sting me?

Beekeeping needs patience. It’s not a practice of instant gratification. The best time to inspect a hive does not often align with one’s own schedule. Weather conditions should be ideal so that many of the workers are out foraging and the bees remaining inside are disturbed as little as possible; it’s easier to see brood, find the queen, and statistically avoid stings. So, sunny. Not windy. Not about to rain. Warm.

I installed my own hive on an agreeable family member’s property, nearby enough that I could check on it weekly. I didn’t sleep the first night after I left my hive. Something to do with the idea that I suddenly had sixty-thousand lives on my hands.

After two weeks of letting the colony situate in its new surroundings, I lit my smoker and opened the hive. I held the brood frame up into the sunlight and saw the queen’s eggs, like tiny grains of rice in the comb. I’m fairly certain I said, She’s laying! out loud, proudly, to no one. As I replaced the frames, bees crawled over my hands and were gentle.

I felt completely vulnerable, my inadequacies on display as I was forced to learn by doing. I learned procedures, but caring for bees meant observing. I would have no words: nothing fully explained. With beekeeping, one is mostly deducing. Inevitably, I would make mistakes. I would have to trust myself and my instincts, and this alone was frightening. And isn’t it so terribly human, to immediately think of how animals make us feel?

Protective: when a large wasp aimed for the hive entrance and guard bees sacrificed themselves to kill it. Guilty: when half the hive swarmed. Astonished: when the bees raised a new queen and she, too, began laying healthy brood.

If I think about it too hard, I balk at the idea that we engineer how animals may respond to us, and what they give or provide us. In the narrative of optional, hobbyist animal guardianship, there are motivations that are elided, mysterious even to those who act upon them. Did I take on beekeeping because my apartment won’t allow dogs? Did I cave to some latent need to nurture? I hope that I followed a desire to witness, but not control, the inner workings of living things.

One flawless August day I performed an inspection. Some frames were heavy with capped honey, in others the comb held nectar, shimmering wet in the light. Nurse bees attended to larvae. There was no evidence of mites, but I applied preventative treatment. The harshness of the medicated strip results in some bee mortality, which I had to come to terms with. Opening a hive, even briefly on a good day, creates a lot of disorder for the bees.

It is rather exposing to realize how out of tune one can be with nature. To notice how dull certain senses are to complement my quotidian life. Weeks later, I had to remove the mite treatment, but the conditions were terrible. It was humid, overcast, one of those swollen Ontario afternoons that bursts into thunder. Because of my procrastination, moving slowly and carefully wasn’t possible. I rushed through the removal of the mite strip, and as I replaced the box lid, I felt a sting on my ankle—my first of the season. I started to trust that I had learned something.

What does it mean to care for an animal that isn’t a pet? As a hobby, maybe it means to ascribe value without expectation. To focus on what is visible, objective, rather than sketching out interiority. Is the queen laying? Are the foragers active and providing? Staring at bees who act for their collective benefit, their wellbeing has evidence. This, a counterpoint to the emotional logic I’d imposed about my own shortcomings and self-absorption.

Maybe domestication should remain strange. According to my 101 instructors, novice beekeepers, or even well-meaning conservationists, occasionally install hives in their yards as though they’re birdfeeders: to enjoy and observe. And it is wonderful to watch a healthy hive on a summer day, bees returning with pollen packed onto their legs like pants in the colour of whatever flower they’ve attended. I think of sheep, across generations barn-raised, shorn, and attended to by veterinarians. An Australian merino ram escaped from his paddock and was rediscovered five years later. Such domestic sheep are bred not to lose their coat and need to be shorn regularly, so his mobility was impaired as a result of the five-year weight of his fleece. Domesticated bees shouldn’t simply be left to their own devices without human intervention and care. Honeybees are vulnerable to predators, pests, and diseases, and if left unattended, infections have the potential to be spread to feral colonies. Good intentions can leave us with nothing to look forward to.

As autumn leaves dropped and mornings frosted over, my bees become cranky and retreated. In these winter months, bees cluster—shiver around the queen to keep warm. As the temperature rises and falls, the cluster expands and contracts. Undertaker bees carry out the dead. I wonder if my bees will survive the winter, if I provided the best conditions. When the temperature creeps to spring-like in January, bees fly, dopey and confused as we all are from the climate change flux.

I remember, back in the full blooming summer, I added a super to the hive to make space for more honey storage. After, I took off my veil and long sleeve and lay down in the grass a few steps away to feel the sun heat my skin. A bee bumped into my head and rebounded on her way. Another landed on my arm for a minute, maybe regarded me but probably not, cleaned her antennae, and took off again. I watched their flight patterns zip across the sky and tried to trace them; it was impossible.

Allison LaSorda
Allison LaSorda’s writing has appeared in The New Quarterly, The Fiddlehead, Hazlitt, Southern Humanities Review, and others. 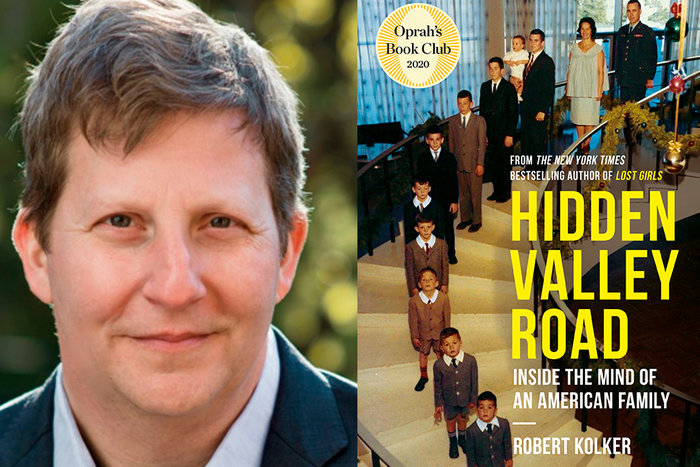 Interview
‘A Little More Like a Career and Less Like a Stunt’: An Interview with Robert Kolker
The author of Hidden Valley Road on true crime reporting, family secrets, and finding stories. 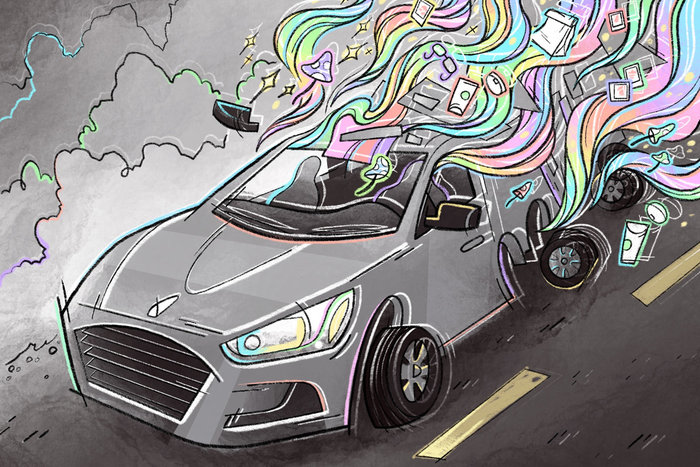 Fiction
The Hazards of Carpooling
This was a real friend. Like old times—better times. When your chip bags spilled over and your idols reeked and all…

'When I Go Into the Forest, I'm Always Reading Into It': An Interview with Jessica J. Lee
Sarah Neilson
When Mountains Were Ugly
Katy Kelleher