Just Eat It: How Food is Slicing Vancouver in Two

Vancouver’s impoverished Downtown Eastside is cannibalizing itself over a vicious argument between fine diners and the area’s desperate need for more social housing.

Jen Sookfong Lee was born and raised in Vancouver’s East Side, where she now lives with her... 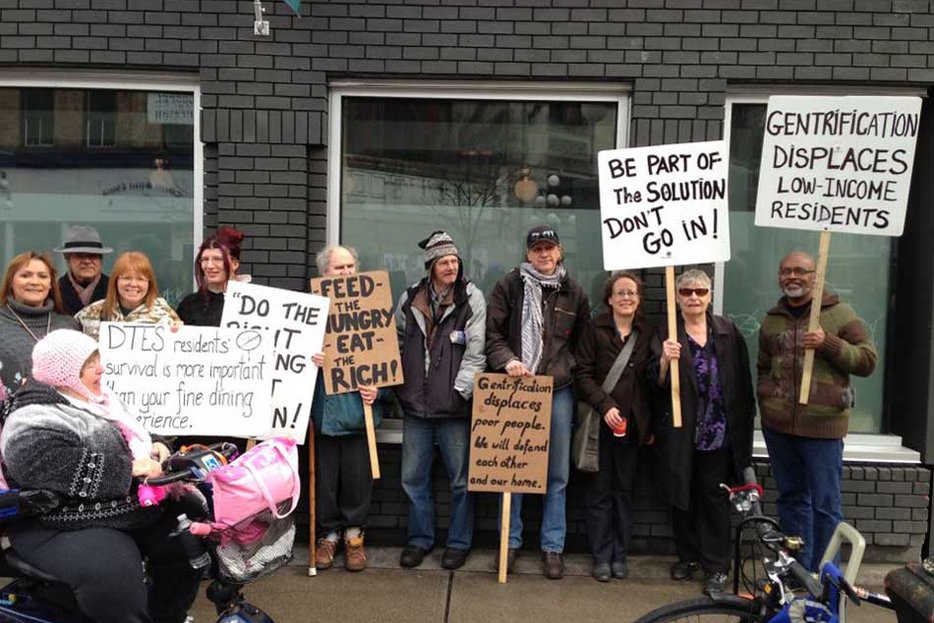 It started with dinner.

My friends and I stepped out of a cab on Carrall Street, opposite Pigeon Park, Vancouver’s most talked-about public space in the Downtown Eastside. For as long as I can remember, it has been where drugs are sold, where addicts gather to sleep on benches and where poverty is at its most obvious. That particular night, we were headed for dinner at Pidgin, a restaurant across the street that had opened in February. But before we could walk inside, we needed to walk past a line of protestors that had been picketing every night for two months. One sign said, “Eat the rich.” The other, “See the rich. 5 cents.” A very nice young man, tall with academic, wire-framed glasses, stepped in front of me.

“Please,” he said quietly, “we’re asking people not to go in.”

This came as no surprise. Pidgin had been in the news for weeks. Demonstrators had been protesting the restaurant’s arrival since its opening and were trying to draw attention to the Downtown Eastside’s growing gentrification, which they believed was pushing out the neighbourhood’s long-term residents—many of whom face poverty, homelessness, addictions, and mental health issues. My friends and I knew that the restaurant’s customers had been heckled and yelled at. We also knew that other Eastside restaurants, some high-end, some not, had been vandalized.

But still, I felt suddenly, hotly indignant. I wanted to tell this protestor who I am, that my grandfather used to own the only barbershop in neighbouring Chinatown, that my father grew up running down the alleys behind adjacent Hastings Street. That poverty is recent history for my family, especially my mother, who still buys soy sauce in bulk and hides the bottles in every closet in her house, just in case. That I have spent most of my professional life writing fiction about the Downtown Eastside and what happens when a neighbourhood is the geographical equivalent of rock bottom. It’s the place you go to die. Or the place you emerge from, fighting and mad.

Instead, I smiled and said, “Have a good night.”

He sighed as I walked past him and then he shouted, “Your yuppie is showing.”

Afterward, I sat at a table, drinking my wine and eating my duck, and I was pissed. For him, it was an easy assumption. I didn’t honour his request, so I was a yuppie. I was eating at this restaurant, a clear indicator that the Downtown Eastside is gentrifying. Therefore, I must not care that the longtime residents of this neighbourhood—usually poor, often struggling with housing and daily survival—were being pushed out by condos and boutiques. I fumed.

“He’s probably a graduate student from Thunder Bay,” I hissed to my friends. “He’s slumming it for street cred.” We laughed, meanly.

The next morning, as the word yuppie circled in my head, I realized that I was as guilty of reducing that protestor to a stereotype as he was of me. He called me a yuppie. I joked that he had to leave by nine to study for finals. We had given each other poorly fitted roles that placed each of us on opposite sides of a great, unimpeachable divide.

We’re not the only ones.

For the past several weeks, as the controversy over Pidgin has raged, I’ve discovered a few things. Vancouver is divided into two camps, camps that can coexist within families or workplaces or cliques of friends. The first are those who support the protests and the Anti-Gentrification Front, a group that has claimed responsibility for some of the actions around East Vancouver, and who deride the foodie culture that grows unchecked in this city. Diners Tweet pictures of their food to their followers. Choosing a high-end food truck at lunchtime is a crippling decision. Our mayor, who once owned a gourmet juice company, implemented a plan called the Vancouver Food Strategy, a hazy platform that claims to focus on urban agriculture, food access and sustainability. Food is a popular, civic and all-encompassing Vancouver obsession, one that is, when looked at with critical eyes, easy to ridicule. If Anthony Bourdain can take on the commercialism of fellow celebrity chef Bobby Flay, it doesn’t take much for someone to poke fun at the sated, earnest Vancouver foodie staring lovingly at his plate of Nicola Valley pork belly with foraged chanterelles.

At the same time, the second camp, made up of those who support Pidgin and the other restaurants, scoffs at what they regard as seemingly well-fed and well-housed protestors taking on the cause of Downtown Eastside residents. It’s easy to assume that the people who are driving the protests are not themselves homeless, but are using the poverty of the neighbourhood to spark division, like the kids in the schoolyard who whisper that Ashley told Carter that Madison thinks he’s stupid, and then stand back to gleefully watch the dramatic results of their handiwork. The Anti-Gentrification Front, when they claimed responsibility for some of the vandalism in an online discussion forum, called it a “class war.” For people looking to criticize, that sounds eerily like undergraduate politics, the kind that are hotly debated at two in the morning after a rambunctious lecture on The Communist Manifesto. Taking aim at an independent restaurant is enough to get a lot of people in Vancouver really, truly mad. Food is king, even when the conflict really isn’t about food at all.

Vancouver is a city that has weathered its share of conflict. The Anti-Asiatic League in the early 20th century, which sparked a Chinatown and Japantown riot in 1907. The birth of Greenpeace. The Stanley Cup riots, parts one and two. Lately, there is no topic that is more divisive than food.

Food is what we talk about. Access to food, street food, veganism, food security. It’s no coincidence that the authors of The 100-Mile Diet live here, or that we’re home to Hawksworth, currently regarded as the best restaurant in Canada. Food seems like a simple and controversy-free topic of conversation, but in Vancouver, it’s just the opposite. Our personal food philosophies mean so much more than just quirks of diet or preferences of taste. If you’re vegan, it means you grew up thinking denial is a virtue. It means you practice yoga. It means food is political. I eat everything. Because I grew up in a Chinese household in East Vancouver. Because my mother never paid for ballet lessons so that we could eat fresh fish. Because food is political.

Geographically too, there is no other city in Canada that is such an obvious amalgam of opposites. There are mountains and ocean, beaches and rainforests, city and Stanley Park. Vancouver is an urban outpost that teeters on the very precipice of the country, both challenging the surrounding nature and falling victim to it. When the rains come, they come hard.

But the tensions don’t end there. Vancouver is a resource town, a place where men came to log or fish or build, and where some made their fortunes. It’s where West End housewives ordered their groceries from struggling immigrants from Italy or China while their husbands spent their evenings at the Penthouse Night Club, watching girls strip to live music as Sammy Davis Jr. smoked a cigar at the bar. It’s a city that is continually being divided and re-divided. In the 1990s, people fumed over the stucco mansions being built on the Westside, with the perception that they were all being bought by wealthy immigrants fleeing China’s occupation of Hong Kong. Today, we worry about these same houses being bought by people in Mainland China, who search for investment properties near schools that rank highly on standardized tests. Vancouver is relentlessly diverse—ethnically, culturally and in every other way. We push the boundaries on everything liberal and left-leaning: ecological responsibility, sexuality, yoga. No one is worried about interracial marriages or the Gay Pride Parade anymore, yet the poorest people in Canada live here, only a thirty-minute drive from the waterfront, tennis-courted home of a Real Housewife. We insist that residents register their backyard chickens, but we still can’t agree on how to solve the urgent and very human problem of homelessness. The divisions that crater through the city prevent governments, social service agencies and grassroots organizations from agreeing where to build social housing or what kind of addictions and mental health programs need to be implemented. This and other conflicts will always resolve and change, but their very constancy means their impact—the public protests and ideological stalemates–will always remain the same. Even as people shiver in the middle of winter on rain-soaked sidewalks.

The Downtown Eastside is at a critical point. The condos are full and the restaurants and boutiques are busy, teeming with customers who can’t afford Westside prices but who also can’t bear the thought of moving to the suburbs. The economy in British Columbia is not as strong as it has been and the priorities of local governments have shifted. The stark human misery obvious in the Downtown Eastside has fallen away while the rest of us, the ones who have the luxury of considering whom to vote for, fret about real estate or gas pipelines running underneath our homes. But it’s clear to anyone who spends time in this neighbourhood that it can’t and won’t stay this way for long. The protestors outside Pidgin, while targeting high-end food and the people who consume it, are marching along a knife-thin edge that separates the two ways the Downtown Eastside could change. It might become an even denser, more concentrated ghetto. Or the gentrification will continue and the longtime residents will have to move, as they have been, further east or to the suburbs, wherever there is cheap housing, social or otherwise.

If we’ve learned anything from the evolution of Vancouver’s divisions then we know that the city is fickle. Once the Pidgin protestors fade away, their picket signs and anti-gentrification slogans will cease to be an issue that divides parents from children or employees from bosses. The chasm will heal over. But cocktail parties and lunchrooms won’t be peaceful for long. A new conflict will bloom and, once again, Vancouver will settle into its natural shape: a city radiating outward from one great, yawning fracture. And maybe, just maybe, I won’t be a yuppie anymore.

Jen Sookfong Lee was born and raised in Vancouver’s East Side, where she now lives with her husband and son. Her books include The Better Mother, a finalist for the City of Vancouver Book Award, The End of East and Shelter, a novel for young adults. A popular radio personality, Jen appears regularly as a contributor on The Next Chapter and is a frequent co-host of the Studio One Book Club. 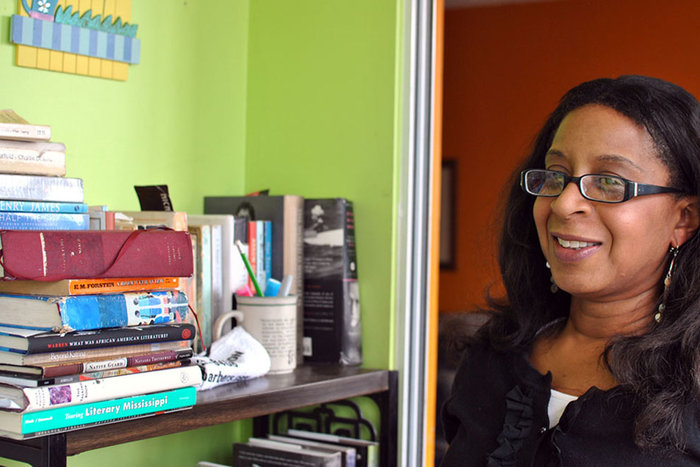 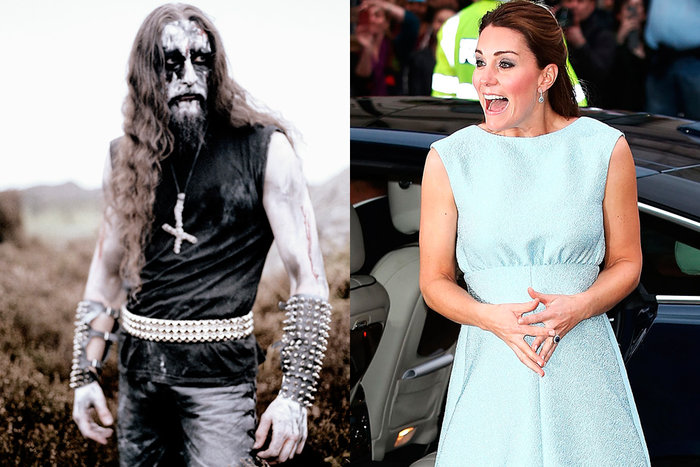