All Hail the New Flesh: The Evolution of David Cronenberg

From The Fly and Videodrome to A History of Violence, the director has long regarded the body with equal parts fascination and fear. His approach has changed, but as a new exhibition of his props and artifacts shows, his focus on the flesh remains. 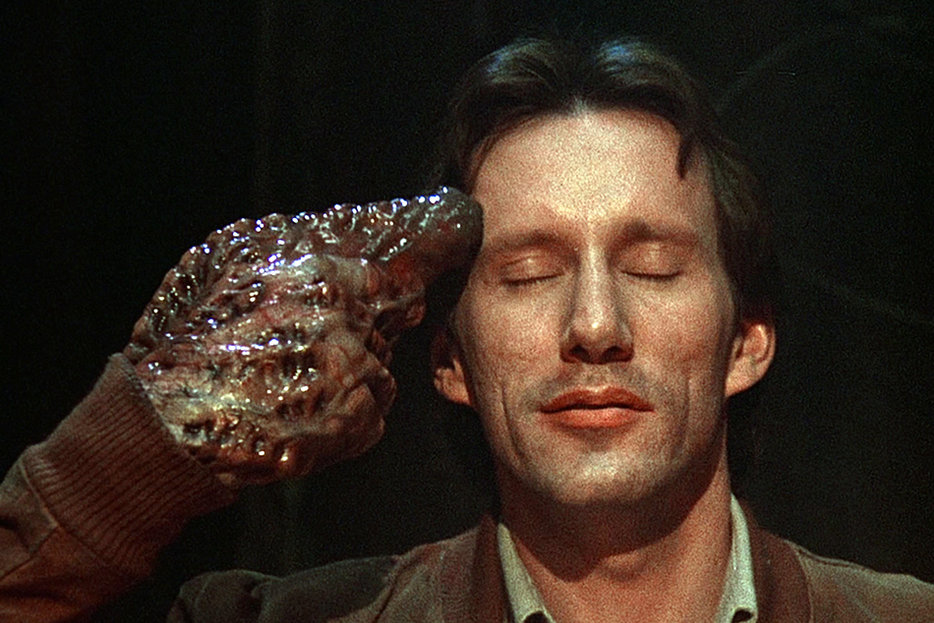 “We ask that you please refrain from photographing the sex blob.” This was how members of the media were introduced, rather ceremoniously, to David Cronenberg: Evolution, the TIFF Bell Lightbox’s first major touring exhibition and counterpart to a month-long retrospective of the director’s films. I doubt Cronenberg himself could have devised a more appropriate salutation. (This was followed by an even more ominous clarification: “You’ll know it when you see it.”)

There is something perversely funny, of which I suspect the curators of this exhibit are acutely aware, about finding the props and costumes of the films of a body-horror master installed in a genteel gallery space—you have to imagine urbane patrons silently strolling the aisles, eyeing the show’s decorous arrangements of foot-long phallic parasites and oozing plasticine polyps, scrutinizing an errant orifice, gently prodding some heaving growth. Here, beneath several stories of state of the art theatres, fine-dining restaurants, and luxury condominiums, the disgusting and the distingué incongruously intersect: in other words, it seems like something that could only happen in a film by David Cronenberg.

Much of the appeal of Evolution, as it is with Cronenberg’s films, lay in a sense of the uncanny—the distinct feeling that what seems inanimate and safe may in fact be alarmingly alive, throbbing with life in the shadows, drawing you in from the corner of your eye. You come to expect this in the world of David Cronenberg. Perusing the exhibit, with its archival furnishings locked securely behind glass, you sort of get the impression that these objects have somehow retained their original function, as if the life-sized Telepod from The Fly or the beetle-typewriter from Naked Lunch could spring from stasis to vivid animation at any moment. As a long-time fan of Cronenberg’s films I naturally found myself mesmerized by the recognizable accoutrements, every relic of cinematic history exhumed and proudly brandished. But I wouldn’t want to stray too far from the tour group or visit again alone at night—some hallucinatory state seems ever on the verge of being triggered, and you wouldn’t want to be around when a mugwump looks at you funny or some decades-old tube TV starts breathing. I can only imagine what the sex blob gets up to when nobody’s looking.

Among the more pleasant consequences of this exhibition, though, is that it very readily facilitates a new conception of Cronenberg’s more than forty-year career, which in its scope has long resisted pat classification. Curators Noah Cowan and Piers Handling, TIFF’s artistic director and CEO, respectively, have quite shrewdly approached the Cronenberg corpus as a narrative in three distinct acts—a strategy that, in its utter simplicity, proves elegant. Act One, dubbed “Who Is My Creator?,” begins with his debut feature, Stereo (1969), and ends with his best, Videodrome (1983), and despite its varying quality, this section of his career remains in many ways the most consistently intriguing and provocative. Act Two, entitled “Who Am I?,” covers the largely forgettable The Dead Zone (1983) to the widely underrated eXistenZ (1999), with the exhibit itself taking a standalone detour through Naked Lunch (1988) in a single-room installation called “InterZone,” perhaps the highlight of the show. Finally, Act Three, inevitably called “Who Are We?,” picks up from Spider (2002) and extends, as you’d expect, to his most recent endeavor, Cosmopolis (2012).

Now, I would point out that The Dead Zone feels too much like a work-for-hire aberration, especially between the otherwise coherent consecutive run of Videodrome, The Fly, Dead Ringers and Naked Lunch, to really qualify as the beginning of a fully formed middle period, as it is positioned here. (I’d counter that his last true “early” film, the last in which you find an artist still finding his voice, is Scanners, from 1981; from there on his work displayed an evident sophistication.) But that slight miscalculation notwithstanding, the narrative proposed by Evolution makes quite a lot of sense—indeed, it helps clarify much about a notoriously strange, complicated career, which often seems governed by a mercurial whim. Narratives are by nature reductive, and even the best fail to account for a degree of nuance. But their purpose is worthy: they help us make sense of the amorphous and uncontained, the loose clusters of everything that orbit around us every day. It seems to me that this one in particular is worth following through.

If there is an obvious through-line unifying Cronenberg’s work, it is almost certainly the body—an object he has long regarded with equal parts fascination and fear. In his early work, he rendered the human experience as one fundamentally at odds with its own physicality, as if the very quality of possessing a body were cause enough for alienation from it. In Shivers, one of the most striking horror films of the 1970s, he imagines the modern urban high-rise as a locus for prurient infection and ever-spreading disease, seeming to anticipate the AIDS crisis of the decade to come. Even personal anxieties emerged as predominantly physical dilemmas: with The Brood, made in the wake of his separation from Margaret Hindson in 1977, he channeled the psychic turmoil induced by his breakup into a sort of demonic preschool litter, baby ghouls borne of woman scorned, giving new meaning to the term “child of divorce.”

But Cronenberg’s body horror wouldn’t truly come into its own until 1983, when Videodrome reoriented the obsession and, in its own words, birthed “the new flesh.” It was here that an alienation from the physical began to converge with deeply rooted anxieties in the technological, a union of themes that would quickly become synonymous with the Cronenbergian sensibility. The architecture of modern living—bleeding-edge analog tech, from the medical to the televisual—began to fuse and mutate in tandem with the flesh, a fear of both manifesting itself in the perverse combination of the two. The films, as a result, started to churn and heave, undulating with grotesque physicality, every object and surface at once tactile and sensual. Think of the stretching screens and makeshift cavities of Videodrome, where every interaction seems pregnant with pre-millennial unrest. Or the demise of the sorry Brundlefly in The Fly, fatally merged with his own machinery, a pod of fleshy gears and wires. This is the real heart of his work: pistons mechanically firing, blood coursing in all directions.

A misconception has defined the last decade-plus of his career—that, in abandoning the gratifying squibs and squirts of the genre film, he has turned his back too on the body. But what Evolution makes apparent is that the only loss is one of tactility: the objects on display gradually drift from distended plastic tumors and the like to rather less glamorous bits, like the costumes from A Dangerous Method or the scissors from Cosmopolis. This simply reflects a technological change. As we have transitioned from the analog to the digital, so too have our anxieties, and what coalesces with the body now is more abstract and remote. Cronenberg can still deliver an immensely physical shock when he is so inclined—think of the coffee-scorched faces and shotgunned backs of A History of Violence, or the hand shooting which caps off his latest film—but in general he has tended toward more duly modern objects and environments, updating his vocabulary to adapt to the clean lines and polished surfaces of the contemporary lexicon. This is hardly a change for the worse. It is only evolution.

Politics
Irony is Dead in the House of Frankenford