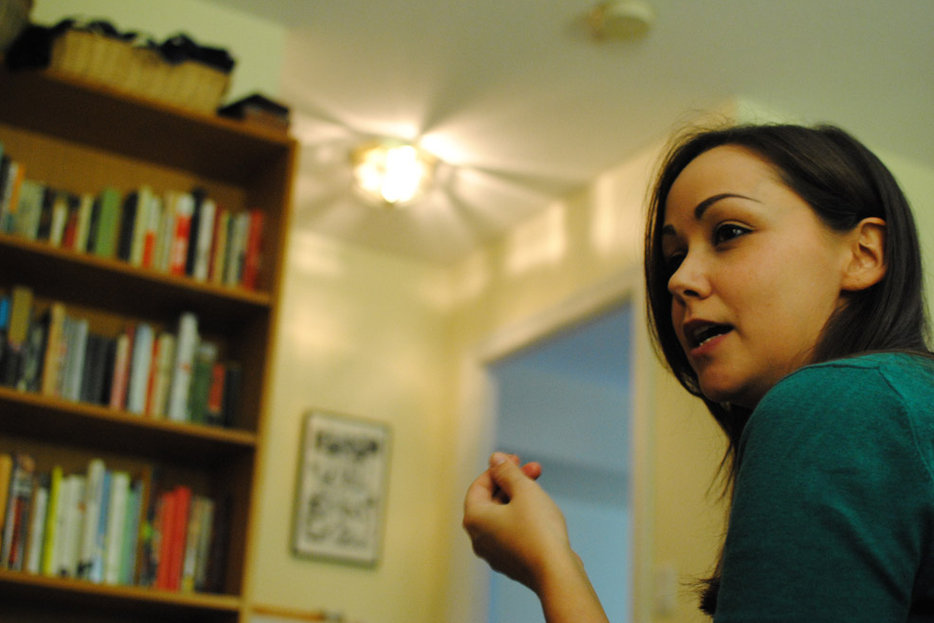 Shelf Esteem is a weekly look at the bookshelves of writers, editors, and other word lovers, as told to Emily M. Keeler. This week’s shelf belongs to Grace O’Connell, whose debut novel, Magnified World, was released earlier this year. Her bookshelves are in her downtown apartment, which she shares with her boyfriend, fellow writer Evan Munday.

We just have a lot of books. There are books in the closet, there’s books everywhere. We’ve got one shelf for non-fiction, one for YA and film theory, the biggest one is fiction. These are all mixed together. Mine and Evan’s. It would be really difficult to figure what is whose, if we ever needed to. We’ve lived together for four, maybe five years. We also have a poetry shelf, but it’s particularly horrifying. We keep the comics on it, too. Oh, and then there’s another book case, which is mostly comics, but also overflow. And then there are all the random stacks of books that are also overflow. 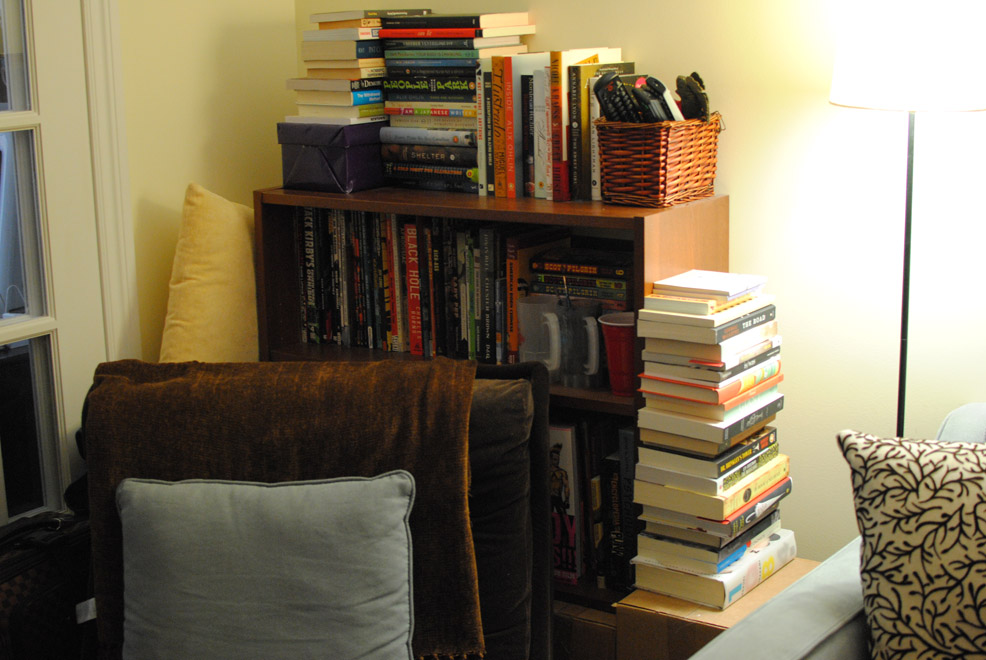 It’s probably about 50-50 Evan and I, though I’m a little bit better about letting go of books than he is, I think. But anything I have a real emotional connection to would never get the boot. Though now that I’m teaching, I need a lot of books for reference, or for study. I don’t want to set course lists that are only books that I like. I teach short fiction, so I really want to give a big range. It’s mostly things I really like, but there are books here that I wouldn’t necessarily sit down and read for pleasure, that I acknowledge the value of, from a formal standpoint. I think that there can be a book that you can admire, that is well written, that you’re impressed by, without necessarily wanting to read it in the bath, or curl up with on a Sunday afternoon. There are lots of good writers that I don’t particularly like to read. I don’t think that’s really a negative judgment because it’s all so subjective. It’s why we can have three different major literary awards that don’t choose the same book every year. 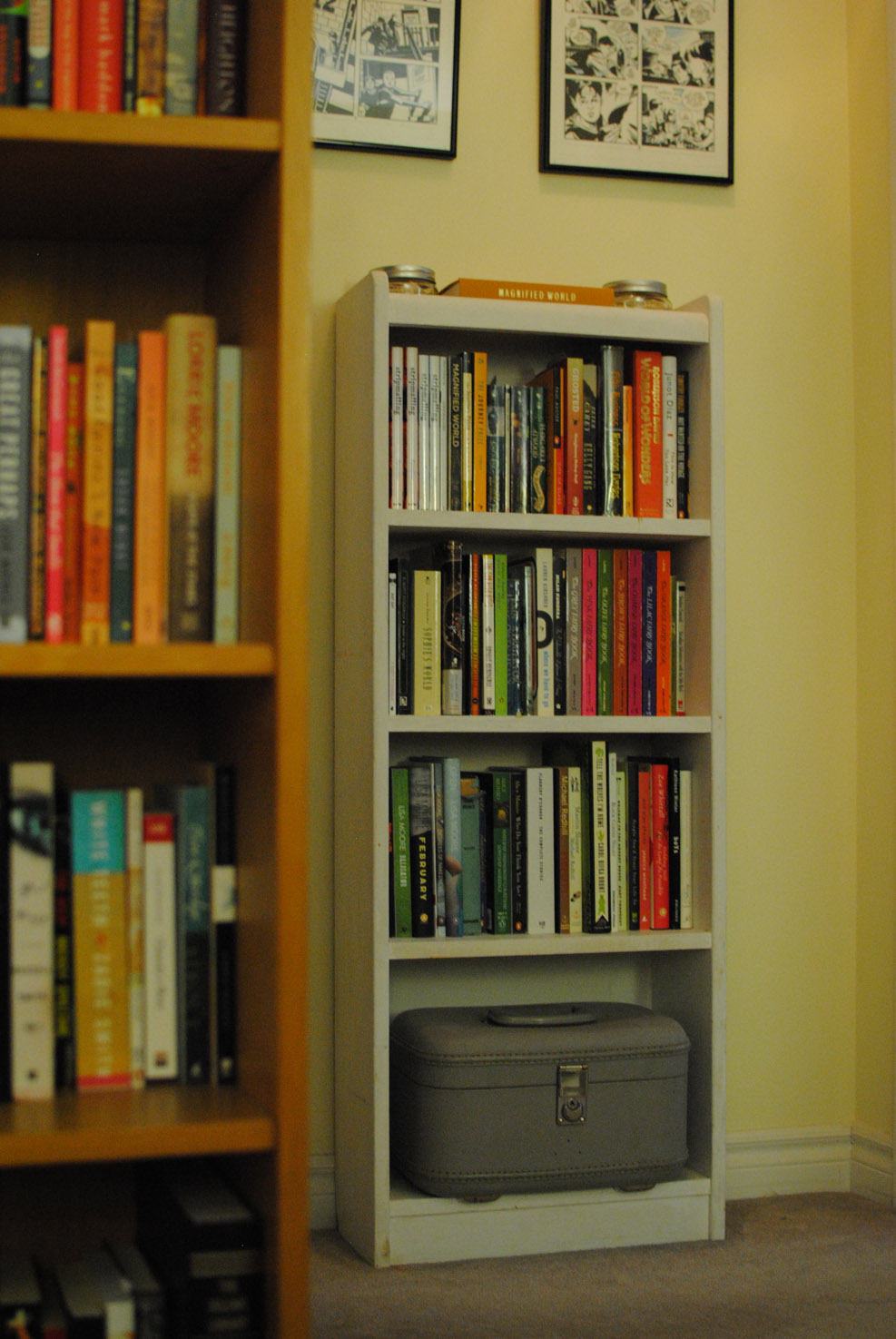 I also have a special book case. They’re all my books, and they’re all favorites, or books by friends. I have my collection of fairy tales here.

Have you seen these before, like when you were a kid? These colour Fairy Books? There’s the Lilac Fairy Book, and the Crimson. There’s probably about 10 more that I don’t have. These were a gift, and all the ones that the person giving me the present could find, I think. They were edited by Andrew Lang in the early 20th century. They’re all super violent fairy tales, like the originals. The Little Mermaid dies at end, and stuff like that. People get put into barrels lined with nails and rolled down hills at the end of one story. But they also have these beautiful plates in them. The artwork is just gorgeous. 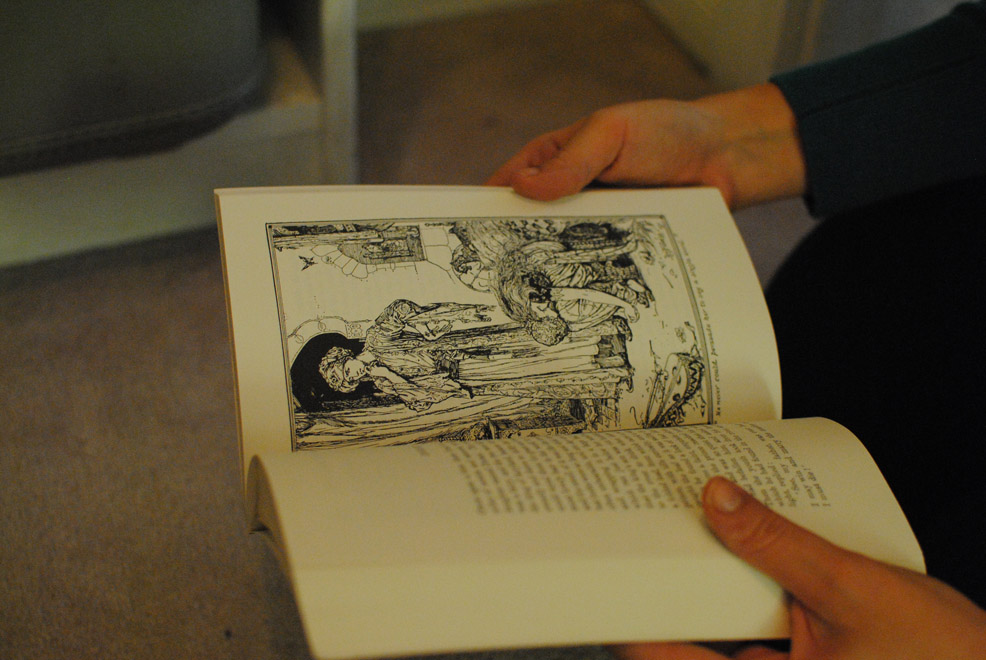 I was rereading a lot of novels, while I was working on my book, to sort of look at the mechanics. There are things in novels that I hadn’t paid attention to until I was trying to figure out how to mechanically do something. I read The Edible Woman a whole bunch of times, because there’s a lot of overlap in sort of plot points, between my book and the edible woman. In the skeleton of it: There is a young woman with mental issues, who is approached by a very odd young man. I have a lot of Atwood, and Munro. Which just goes to show you that it’s not always a bad thing to be forced to read a lot of CanLit in high school. I had Fifth Business foisted on me in high school and thought I would hate it. And I think it’s one of the most perfect books ever written.

I’ve got plenty of Findley, lots of short stories. It’s a pretty Canadian book shelf. I really liked CanLit in high school, and then after I moved in with Evan—we both work with books—it became sort of unavoidable. But there’s such a great breadth that I don’t feel constrained by reading mostly Canadian, because y’know, you can read Timothy Findley one day and Emily Schultz the next, and Russell Smith and Sheila Heti, I mean, I don’t think you would get any more variation by reading internationally. But there are lots of international writers I like as well.

I just read this book, Tell the Wolves I’m Home, a little while ago. It was so good. It’s set in the ’80s in upstate New York, and there is a young girl, I think she’s about 13. Her uncle dies from AIDS, and he was her best friend. She only finds out after his death that he had a partner for years and years, like, decades. They were basically together for this guy’s whole life, but she was never allowed to meet him. So they start meeting surreptitiously, because they’re the people who miss this guy the most. And it becomes a big scandal with her family. It’s one of the greatest coming of age stories that I’ve ever read. I was finishing it on the plane back from Boston, and I was just howling with tears, crying on the plane. 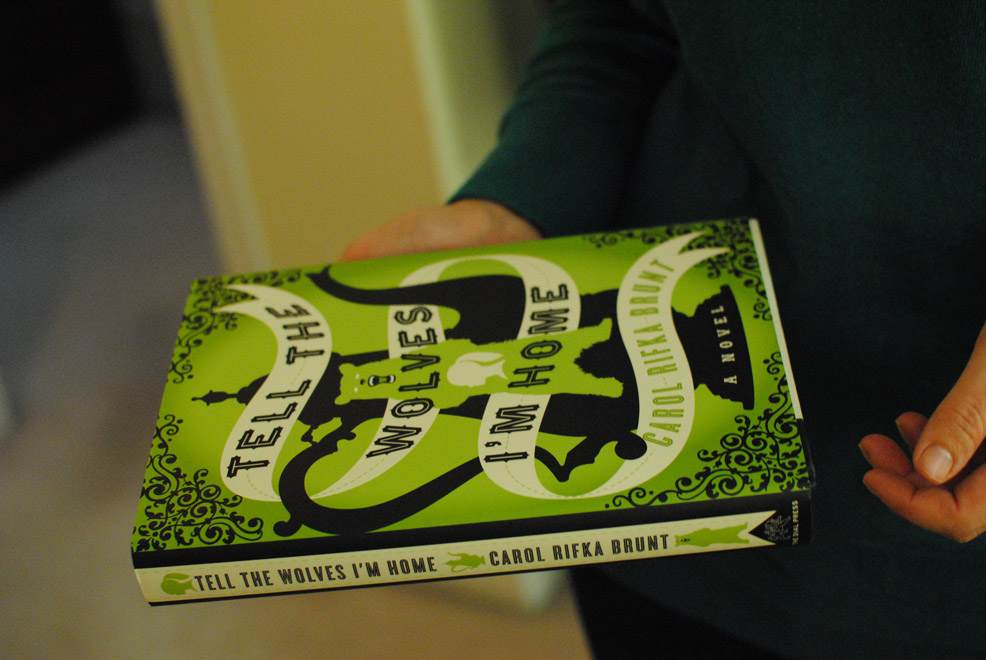 Oh, also David Gilmour. He’s an incredible prose stylist. He has a really clean, really elegant style. But a lot of his subject matter I find…“disgusting” is too restrained a term. But when he writes about things that aren’t old men with prescription pill addictions having sex with 19-year-old ingenues, I love him. He’s an amazing writer. I remember the piece he wrote on War and Peace for the Walrus, and this was years ago. It was so good, I went through and I was just underlining phrases that I thought were amazing and I never do that for magazine pieces. You could compare him to Raymond Carver and Hemingway—also assholes in real life, but I don’t think that their assholeness came across as much in their writing. You read The Sun Also Rises and you don’t get the sense of sexual entitlement that Gilmour has. You might get a class entitlement that’s pretty uncomfortable, but I mean, you actually have a literally impotent narrator who’s sort of powerless against women as well. Which you’re not going to find in a Gilmour book, except in an ironically self congratulatory way. 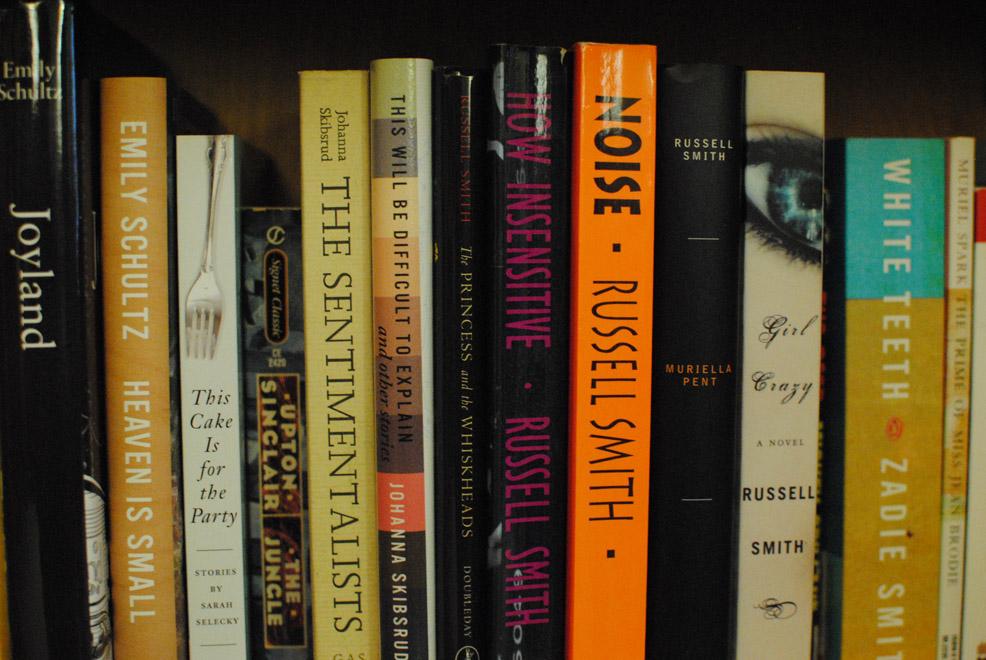 But I actually think that in many ways he’s been quite overlooked critically, probably because of his subject matter. And I think that somebody else that I would say—that I think is underrated as a stylist is Russell Smith. I think he’s an unbelievably good writer. It sort of mystifies me that he hasn’t won every writing prize in Canada. I think Girl Crazy is basically a modern Canadian Lolita, which was for all of its controversy praised universally, at least on the level of style. But yeah, Girl Crazy doesn’t necessarily have the epic themes that we normally reward. But I just think he’s so talented. They’re great books for writing students to read as well, just to see that kind of restraint and technical genius.

Really, when it comes down to it, when I choose books to read—other than all the books that my friends write—I’m not really particularly worried about the cache of what I’m reading. I just wanna read something where I forget that I’m reading. That’s what I love about authors like Munro. I feel like the set just falls away and you just are there. And that’s nice, because you’re not really thinking about style or technique at that point. You’re just in the story—even though she is an incredibly accomplished stylist. It’s like virtual reality or something. 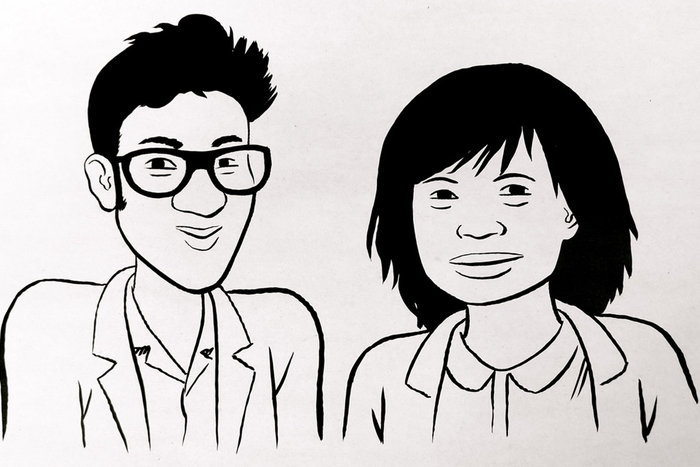 Culture War
Elmo’s Sex Scandal vs. the End of INXS