Not This: Considering Oscar Isaac’s Face

“I like when you watch something,” Isaac once told Rolling Stone, “and you get the sense it’s something you’re not supposed to be seeing.” 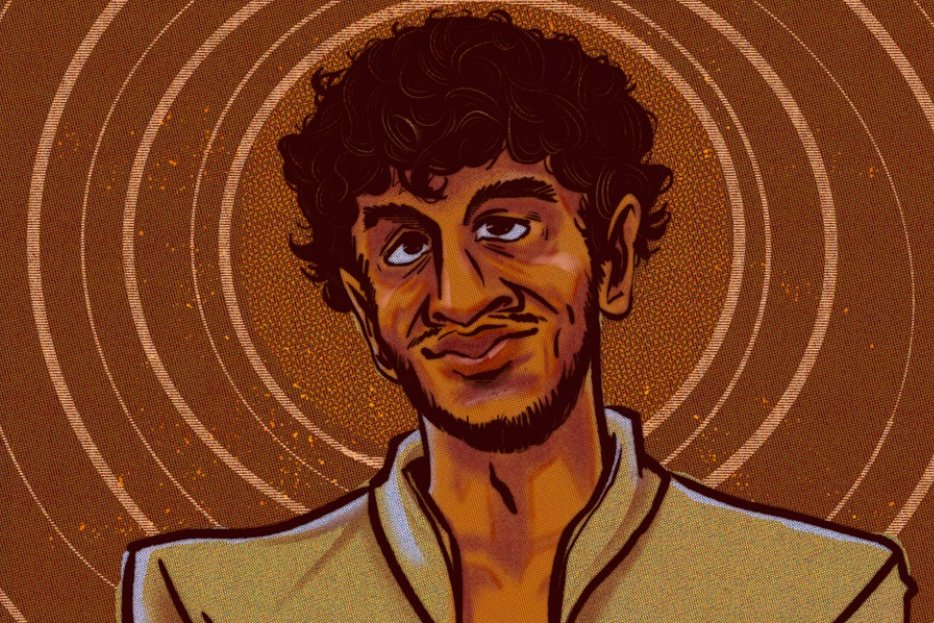 Before he became the perfect internet boyfriend and a hot professor dad, Oscar Isaac was an unlovable loser. The first time I watched Inside Llewyn Davis, on a drizzly winter morning in 2014, I was surprised to learn that being good-looking isn’t enough. Isaac plays the eponymous balladeer-singer, a man constitutionally incapable of catching a break in 1960s New York. Not too long ago, he was one half of a promising folk duo, but then his partner died by suicide. Now he performs solo for pennies at bars—dire, hummable ditties, actually sung by Isaac, bereft of a chorus. His life is a litany of pregnancy scares—usually after a fling with someone else’s girlfriend—and misgivings about becoming an artist. Most nights he ends up on friends’ or strangers’ couches, expecting the next day to be no different. Deprived of royalties, and all signs of affirmation, he wonders whether he was better off becoming a sailor like his father. “You have to owe me something,” he just about begs his manager at one point. “It’s cold outside and I don’t even have a winter coat.”

In the opening scene, at the iconic Gaslight Cafe in the Village, Llewyn bellows his heart out in a fit of barely restrained anguish, but the evening clientele  responds hesitantly, clapping more as an afterthought. The next evening, a lanky youth in military fatigues mumbles something less dolorous from the same podium and Llewyn can only watch from the sidelines as the audience applauds with vigour. The soldier finishes his song and then invites a couple of Llewyn’s friends to perform a number together on stage. This time the crowd, unprompted, joins in the chorus.

Surveying the singing crowd, Llewyn—or rather, Isaac—raises his heavy eyebrows and shakes his head. Moments ago, he had mocked the soldier’s voice. “Does he have a higher function?” he’d wondered aloud to a friend. But the look that passes through Llewyn’s face is not one of resentment, although the plot of the film indicates that might be the case. You’d think that the soldier has everything Llewyn might covet: the promise of youth, a steady job to cover expenses, a disposition at once sunny and sincere, an offer of representation from a kingpin Chicago manager who is also on Llewyn’s wish list. One morning, we see the soldier striding confidently about the lower West Side in full military regalia. Llewyn, on the other hand, has grey streaks sticking out of his unkempt curly hair and wears the same thrifty-looking scarf and brown jacket everywhere. Indeed, his overall appearance mirrors his working definition of folk music: “never new and…never gets old.” And yet, that evening at the Gaslight, he doesn’t exactly seem envious of the response to the soldier’s performance. When he shakes his head at the crowd, it’s more that he can’t believe their tastes.

There comes a moment in every Oscar Isaac performance when his resting face onscreen betrays that look, flitting between disapproval and discernment. His temperament as an actor might be more immersive than inventive, but soon enough a close-up will focus on his half-drowsy eyes when they are inadvertently poised in disbelief, as if to suggest, “not this.” In Ex Machina, Isaac plays a billionaire edgelord, Nathan, who works bare-chested out of his secluded AI research facility somewhere in the mountains. After a day spent perfecting sentient sex robots, Nathan drinks himself to sleep every night alone in his living room—you glimpse that look in these moments, replete with flashes of absolving self-awareness. Jonathan, the forbearing professor and father in last year’s HBO remake of Ingmar Bergman’s Scenes from a Marriage, strikes a familiar note as the bespectacled, betrayed husband. But the fact that he is just as capable as his partner of inflicting emotional cruelty is never in doubt, even though we are rarely shown those scenes.

As Llewyn Davis, Isaac’s mannerisms oscillate between ecstasy and despondency. The film itself delicately straddles the real and unreal faces of the American dream, both the stage-lit myth of making it big and the dark underside of the hustle, so that even at the brink of exhaustion Llewyn must, in some way, be ready to roll. It’s not enough that he can sing and play the guitar; he has to act out the part of the tempestuous musician at dinner parties, inside recording studios, with his sister and father—like Sartre’s waiter going through the motions of being a waiter in a café. The poetry of Isaac’s performance is unforgettably evident in one scene when Llewyn is told that a comedy song he had worked on some time ago is set to become a chartbuster. This should have been good news, except that after recording the track he had signed away his right to any future royalties in lieu of some quick cash. For a flicker of a second, you can perceive in Llewyn’s face the incredulity of someone who has missed his chance again, but then, without missing a beat, he is back to playing at being a mercurial artist. He is at a dinner party, where the hosts have been parading him around as “our folk-singer friend.” Soon they will invite him to strum a tune. He’ll refuse at first—the other guests would no doubt be impressed if he took his time to relent. And so a pivotal moment is passed off as casual, not so much to downplay its significance, but to suggest that Llewyn, for all his ambition, is at peace with the inexorability of his modest fate.

In interviews, Isaac seems aware of the moods his face can evoke. “I like when you watch something,” he once told Rolling Stone, “and you get the sense it’s something you’re not supposed to be seeing.” Why, oh why, has he then preoccupied himself with so many fantasy projects over the years: movies saturated with VFX sequences and puerile storylines, where his face is often the last thing you’re supposed to be seeing? It could be that he loves the genre, or that there aren’t many big-ticket choices available for actors to pay their bills these days. To emote alone in front of a green screen is perhaps the archetypal scenario of a movie star playing at being one in our time. I feel wistful when I watch Isaac blow up buildings and nemeses in  X-Men: Apocalypse, and the recently released Marvel TV series, Moon Knight. As Poe Dameron in the Star Wars films, at least you get to see his face always unmasked, but you miss the grace with which a creased eyebrow could once reveal a protagonist’s inner life.

Interview
‘It Did Away With the Entire Juvenile Justice System’: An Interview with Kathleen Hale
The author of Slenderman on deinstitutionalization, early onset schizophrenia, and “crimes of the century.”

Interview
‘We Should Be Articulating Joyful Alternatives’: An Interview with Nona Willis Aronowitz
The author of Bad Sex on the body horror of pregnancy, selling books about sex, and why this might be her last word on…