Class Anxiety at the Farmers’ Market

Or: You expect me to pay two dollars for a tomato? 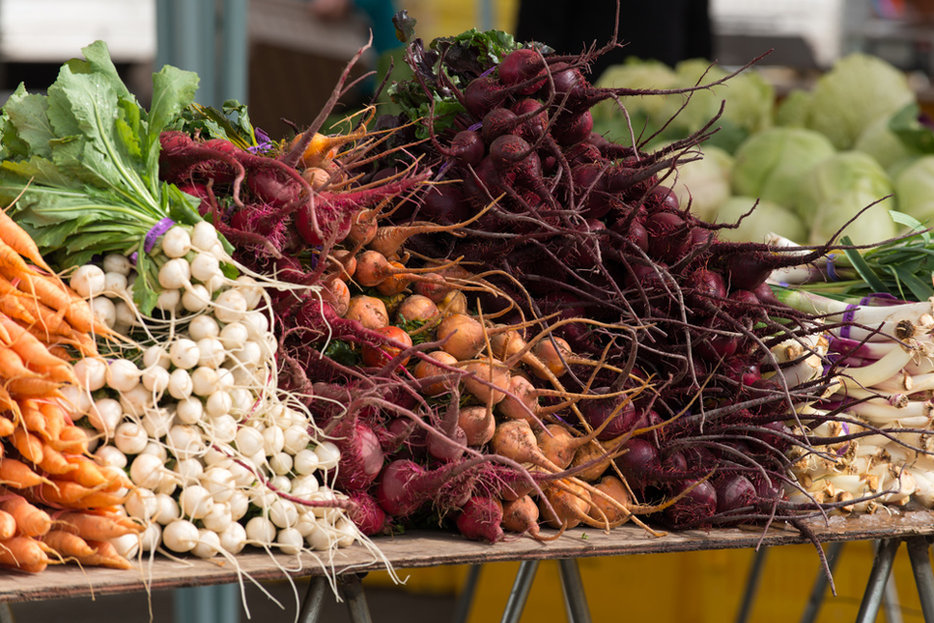 When you’re with somebody for long enough you begin to create your own traditions—little rituals that place a relationship in the context of a longer arc, that give it depth. My girlfriend and I, for example, spend most of our Thursday evenings at the local farmers’ market. We eat a fish sandwich. We talk to the mushroom guy. We have a look at the produce, chat with friends. And then, at a certain point, we spend a good two hours viciously fighting about the merits of organic food, arguing in a way that is totally uninformed and yet very hurtful, weirdly personal and almost instantly embarrassing.

A few weeks ago, my girlfriend was chatting with a couple of friends near the mushroom guy’s stall when I paced towards them, outraged. “Guess how much this cost me?” I demanded, brandishing an organic heirloom tomato. “Two dollars.” I looked into their faces, waiting for the howls of sympathetic outrage. “Two dollars. It’s not even ripe.”

“Two dollars is expensive,” one friend said politely, agreeing with me the way you might agree with a wild-eyed man who approaches you on the street and asks you if you think the moon seems A LITTLE SUSPICIOUS LATELY.

Afterwards, walking home, I couldn’t stop talking about the tomato. “What kind of society is this,” I seethed. “Who are we, spending two dollars on a tomato?” This is a recurring scene: me acting unreasonably churlish about some food outrage, my girlfriend gradually losing patience, and then an embarrassing fight. In these moments, I usually cite studies about the myth of organic foods that I half remember seeing on someone’s Facebook wall a few years ago. For all we know, I say, local food could be bad for the earth. Do you know how energy efficient sea travel is? It’s probably better for the environment for us ship carrots from China than to buy them from this market, where some exhausted farmer has consumed who knows how many resources just to have the energy to hand-pick the weevils from his patch of heirloom carrots. And what does “heirloom” even mean, carrot-wise?

These arguments are, of course, moronic. More than that, they’re totally beside the point. My objection to the farmers’ market isn’t about the environment or energy efficiency. It’s not even about being too poor to spend money on artisanal potatoes, although that’s a factor. If I’m being honest, my aversion has more to do with a certain cultural discomfort with the entire scene. It’s tied to an unreasonable feeling of scorn for hippies with disposable income, a bubbling self-loathing about being a “farmers’ market guy,” the sort of person whose idea of a good time is spending a fortune on some wretched, knobbly cucumbers. The fight is about the tomato, sort of, but like so many stupid arguments between privileged people on matters of taste, it’s mostly about identity.

“Ethical consumption” is often framed as a political act. It’s a way to “vote with your dollar,” to nudge the world in the direction of your choosing one purchase at a time. In a recent article in the Journal of Consumer Culture, however, a group of sociologists looked more critically at the class issues that come into play when you head to the farmers’ market or the local butcher.

Their central argument is that buying an heirloom tomato is as much an act of class positioning as it is a political or ecological act. Conscious consumers have “ecologically oriented high-status tastes that are central to their identity projects and strategies for claiming status and distinction,” the researchers write. Buying local organic kale isn’t just a health decision or an environmental decision; it’s an act that help defines who you are, what values you hold, where you fit in society. An overpriced tomato is as much a status symbol as a new iPhone.

Using information from two different surveys, the researchers were able to create a broad portrait of the American ethical consumer in the 21st century. They found, first, that conscious consumers were overwhelmingly white and overwhelmingly wealthy. A disproportionately high percentage of them had graduate degrees. They were twice as likely to have a father with a graduate degree than the average respondent. They were, in other words, the kind of “downtown elites” that populist politicians have long railed against. The “heirloom tomato-eater” is what the “latte swiller” once was, before Tim Hortons started serving espresso-based coffees.

The study follows the work of Pierre Bourdieu, the sociologist who described how our tastes are delicate acts of social positioning, ways to gain cultural capital and assert our spot in the social hierarchy. Interviewing participants in four case studies in a large northeastern city, the authors found that these eco-friendly individuals—rich and educated, with plenty of cultural capital—were different from the elite of the past. Where the privileged used to pride themselves on being cosmopolitan, the ethical consumer was in love with the local. And while manual work was once seen as inferior to mental work, a new attitude has Brooklyn graduate students embracing the kind of pickling and baking that would have once been dismissed as unskilled labour. “Taken together,” they say, “these findings suggest that at its core, the field of high-culture consumption has increasingly absorbed an ecological consciousness.”

None of this is necessarily bad, of course. The fact that the status symbols of the privileged are environmentally friendly turnips rather than expensive cars or private islands is surely a good thing. Ethically treated beef should be an aspirational product. An ecological consciousness should be a mark of distinction.

It is progress, in its way. But that doesn’t make the idea of a two-dollar tomato any less irritating.